New Book Publication: ‘The Tokyo Tribunal: Perspectives on Law, History and Memory’, the Latest Volume of the Nuremberg Academy Series, is out now

This edited volume combines perspectives from law, history and the social sciences to discuss the legal, historical, political and cultural significance of the Tokyo Tribunal. The collection is based on the international conference marking the 70th anniversary of the judgment of the International Military Tribunal for the Far East (IMTFE), which was held by the Nuremberg Academy in Nuremberg in May 2018. The volume features reflections by eminent scholars and experts on the establishment and functioning of the Tribunal, procedural and substantive issues as well as receptions and repercussions of the trial.

The IMTFE, held in Tokyo from May 1946 to November 1948, was a landmark event in the development of modern international criminal law. The trial in Tokyo was a complex undertaking and international effort to hold individuals accountable for core international crimes and delivering justice. The Tribunal consisted of 11 judges and respective national prosecution teams from 11 countries, and a mixed Japanese–American team of defence lawyers. The IMTFE indicted 28 Japanese defendants, amongst them former prime ministers, cabinet ministers, military leaders and diplomats, based on a 55-count indictment pertaining to crimes against peace, war crimes and crimes against humanity. The judgment was not unanimous, with one majority judgment, two concurring opinions and three dissenting opinions. The trial and the outcome were the subject of significant controversy and the Tribunal’s files were subsequently shelved in the archives. While its counterpart in Europe, the ‘International Military Tribunal’ (IMT) at Nuremberg, has been at the centre of public and scholarly interest, the Tokyo Tribunal has more recently gained international scholarly attention.

The Nuremberg Academy Series is a book publication series of the International Nuremberg Principles Academy, published by the Torkel Opsahl Academic EPublisher (TOAEP). Dr. Viviane Dittrich is the Series Editor. The Academy and the Centre for International Law Research and Policy (CILRAP) co-operate on the promotion of high-quality open access publications in international law.

The Series includes work that is interdisciplinary and brings together academics and practitioners focused on practical and innovative applications of international criminal law. It covers relevant and topical areas that are under-researched or require renewed attention. Grounded in the legacy of the Nuremberg Principles – the foundation of contemporary international criminal law – it addresses persistent and pressing legal issues and explores the twenty-first century challenges encountered in combating impunity for core international crimes. 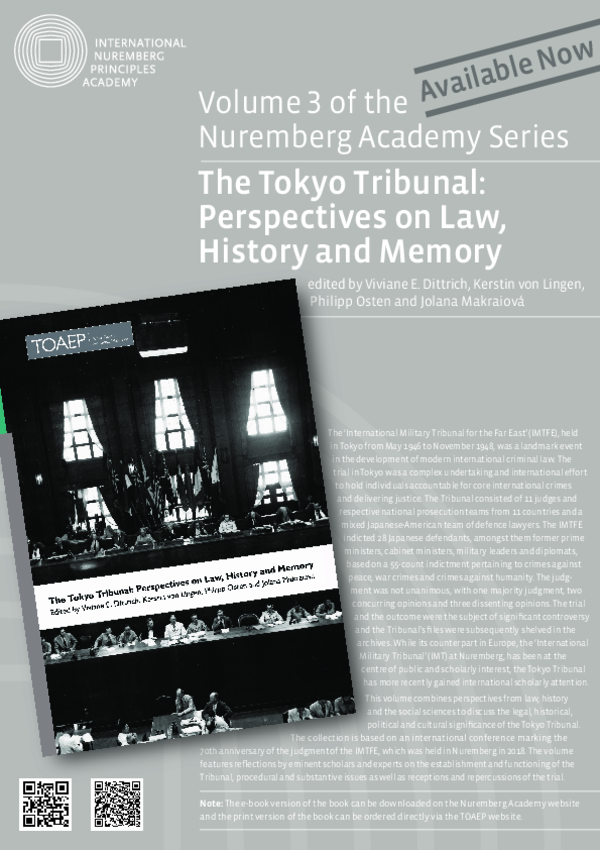 Feel free to download, print and disseminate the poster (A4) announcing the book release.